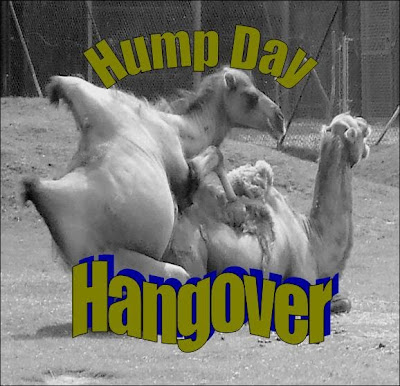 When I started this little project, I never imagined I would have the response that you have all given me. Yes, I have lost some followers because of it, but I have gained far more than I have lost. We are only a month in and this has become a great journey. The greatest thing about this is that I have learned that there are a ton of people out there who want to talk about SEX. So let's do it. I have decided to open up Hump Day Hangover to ANYONE who wants to talk about sex. Just send me an email and I'll get you scheduled to guest post.

Today I am hosting my first guest blogger ever!
Many of you know T!nk from This is How it Feels. He is awesome, sexy, funny, real and he is my gay. I know I share him with others but that's cool. I have sisters. I learned to share when I was young.

Read what T!nk has to say about his sexcapades. And then go to his site and follow him. He is SO worth the extra blog in your reader!


I consider myself a classy woman.

I cook, I clean, I never leave the house lookin' a hot mess, you would never find me on peopleofwalmart.com. (<-----I mention them enough they should be my sponsor). I always have my face on*, hair did, outfit lookin' fly, I mean, you never know when you could be signed to Wilhelmina.

I've got home trainin' so I know how to act in public. I am a gracious host/guest, unless you've pissed me off, but even that I will handle in a classy manner. I never attempt to procreate on the first date. If it went well, you will get a kiss and a hug at the end of the night, and if it went REALLY well I might use tongue. I never act like a ho in public.

But I am a sexual being.

I'm a freak in the sheets... or lack of bedding attire, or bedding apparatus thereof.

When I first started becoming sexually active (we can say that, I mean, we're all adults here, no? fine. I'll substitute) I realized that there was one place that was taboo for me to make whoopie.

I mean, I've "bumped uglies" in a church parking lot (where my dad was the preacher), basement, hallway, deep in the woods, back porch at 2am, on the couch, kitchen counter**, on an empty train, down by the river, in the backseat of any model of car you can think of, the shower, kitchen sink, the bed of all models of ford truck, behind a tent in Iraq, mall parking lot, and one time in the middle of the park at 3am. There was one place I had left to discover.

I had never "done the do" in my own bed (I once knocked boots in my Dad's bed once as a big F U, but that's another story). When the time finally "came" for me to do the nasty in my own bed, it was like a foreign place to me. It was new, and exciting, and I was afraid I was going to need a special spill kit for my Egyptian Cotton Sheets.

But I didn't just let anyone in my bed. I mean, I'm a classy woman, that's like, personal. A bed is for sleeping and sleeping is intimate? Right? That would mean I had to, like, put myself out there on a more than purely physical level, right? Then I would have to have, like.... substance.

It was then that I realized that I was more than what I could offer in the boudoir. I was smart, funny, intelligent, loving, caring, a real catch. And I'm basically June fucking Cleaver in the kitchen.

If I was such a catch... then why was I giving my goodies away to any gentlemen caller that was above an 8... (on the hottie scale) who had a nice smile and a twinkle in his eye?

I realized then that I didn't feel like I was such a put together woman. And that all that put togetherness on the outside was a mask for the mess inside. The lonely, scared, angry, needy, emotionally dependent little gay boy. And the mattress mambo, for me, became a way of finding love and happiness because I didn't have it within myself.

It was then that I started the journey to love myself. While it's been an uphill battle, it's been one that I am winning. I feel like I love that lonely, scared little boy so much more today than I ever thought I could. And it's not easy. There are days where I am down. There are days when I am too hard on myself. But overall, it's been a good ride.

And when I started dating again, and opened myself up, put myself out there, I did so in my bed. No spill kit, no safety net. One man, on one man. Just as God intended ;-)

*face on: having 15.5 lbs of MAC makeup on, looking similar to Jan Crouch, she's classy.

**for health reasons, I wouldn't necessarily suggest this surface.
Posted by Yankee Girl at 6:13 AM

Great guest post! :) I've been a little M.I.A. from the blogging world lately and this is my first time checking out your new project... I like it!

Love the guest poster! and love the idea of openly talking about the sex subject, I think we all need to get more comfortable with talking about that kind of stuff! (I know I do) I'm so glad for Tink that he finally was able to do it in a bed:)

Love me some Tink! xoxo

T!nk, you're a good kid and Orlando has been good for you; look at all of these insights you've had.

Now, about the kitchen sink - isn't that why God made Chlorox wipes?

All models of Ford Truck - way to go; avoid the Toyotas for now unless you take precautions ;-)

SPEAKING FROM THE CRIB said...

we all know i love tink.

and he was MY gay first

That was a great post. Insecurities know no boundries, be they your sex or how you have sex with.

Great guest post! There is nothing wrong with openly talking about sex. I applaud YG and T!nk for being so open!

Are a bunch of us going to arm wrestle for T!nK's affections?

Because I like to think I was one of his first fans. Though if I remember correctly, Gun Diva claimed him before I did. And Sara without an H.

Am I way off topic?

I grew up with such a warped sense of sex, like it was a taboo topic and should never be discussed. It wasn't until my current situation that I've realized otherwise and have a healthy outlook again. Loved your guest post!

Monique is right. I'm a little possessive of Natcake, but I suppose I shouldn't try and take ownership of him... eh, whatever.

You're a social little cupcake lately, aren't you? You're everywhere! You're like Oprah.

How does it feel to have all these gals fighting over you? Some guys would kill for this affection.
xoxo

It's an amazing journey trying to love yourself! You realize so many things about yourself that you never knew before!

I'm glad you've made it through that journey and you're on the other side now!! Congrats!

Thanks for all the love ladies!! and I love it when the ladies fight over me! love youuu!!

I love the idea. Maybe it will push me to have more

What a wonderful guest post! It was a great combination of touching and humorous. For some reason my jaw hit the floor at "behind a tent in Iraq."

I'm glad my favorite post of the week did not disappoint!

If that's your picture on your blog, I'd say you don't need to do much to look presentable in public.

I've done it in a variety of strange and uncomfortable locations in my life, and I have to say, in my old age, I much prefer a bed to anything else.

Girl, you lost followers? I can't stop following, because your Hump Day Hangover posts are always like a train wreck. Like, when your hubs farted? You can't make that crap up! :) LOL! I just can't look away.

What a funny, fabulous guest post! I think this little project of yours will catch on nicely ;)

um, amazing. I am totally loving this guy, Yank. Thanks for the guest post!! You follow the most baddass blogs, man.

OMG! Where have you been hiding all my life T!nk???

I'm heading over to your blog to stalk you.....

This is fabulous!
- Cougs @ www.cougar-tales.blogspot.com

What an eye-opener. Thanks for being honest!

super guest post!! Hope you are having a nice weekend!!

I apologize for the comment that I left on your blog