It is Leland's Birthday Today..... 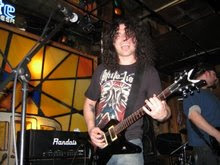 (Ok, neither of us really think he is the greatest man alive, we just joke about it.)

Though I do think he is pretty awesome most of the time.

Today is Leland’s birthday. He is 30. 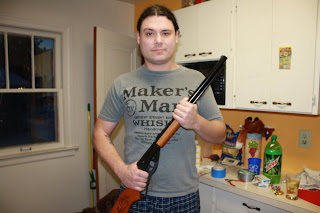 He is having a hard time with his whole turning 30 business, so I thought I would come to all of you for help.

Please leave me comments telling Leland about at least one awesome thing about being in your 30’s. And if you aren’t 30 yet, let Leland know what you are looking forward to when you get there.
Posted by Yankee Girl at 6:55 AM 20 comments:

I was bored at work last week and I decided to write a holiday letter to include with my Christmas cards. I have never written a holiday letter, and never though I would actually be the holiday letter writing type, but boredom often leads me to doing things that are a little out of character.

And since I haven't done much blogging lately, I thought I would post it for all of you to read. Enjoy!


Well friends and family, it has been a hell of a year.

We are not too sad to see this one go, because like I just said, it has been a hell of a year. But in the season of merriment and joy, and because our lives are oh so interesting, I have decided to give you a top ten list of cool/fun/really-annoying-things-that-we-laugh-about-now that happened in the past year.

Are you ready for it?

Because it is going to rock your world.

10. I had a battle with the US Census Bureau. You see, it apparently wasn’t enough for them to count our house once. They had to keep coming back. And calling. So I refused to talk to them, ordered workers off my front porch, gave a ton of wrong information. I am certain that my determination to not be bothered kept census workers in my area working for longer. You know, I did whatever I could to stimulate the economy.

9. Dwight Schrute found a place in our hearts. He is part of the family now. We just cannot live without him.

8. Leland made dreams come true and performed Body Talk by Ratt live onstage for my birthday.

7. We both wrote books that are funny and absolutely ridiculous that everyone should read but will probably never be published.

4. I peed on Leland. For real. It was medical advice given to us by Madonna. We were just trying to get rid of a rash. Too bad it didn’t work.

3. We saved a dog from the sad life that is living at a truck stop in Arkansas. Shorty came to us skinny, full of ticks, limping because he had a broken hip, and was the object of target practice and had a bullet in his leg. Now he is overfed, flea and tick free, all fixed up and living with our friend Joe and annoying the hell out of him.

2. I broke my pelvis. Because I rarely do things half-assed, I didn’t just break my pelvis, I broke it in two places. Unable to walk for four weeks, I just lounged on the couch and reignited my love for Boy Meets World.

1. Leland cut the head off a dead squirrel and hung the head from the basketball hoop in our driveway. It was quite the summertime conversation piece. That skull is now sitting in our hallway as part of Leland’s death shrine.

So there you have it. I told you it would rock your world!

Let’s raise a glass and toast to having a fabulous Christmas and a spectacular 2011!
Posted by Yankee Girl at 10:00 AM 26 comments:

If you want to know what this is about click here.

Remember a long time ago when we first started this adventure and I told you all about Leland’s random boners?

Remember how I told you he gets a ton of random boners every day?

Boy was I wrong.

Though are sex life may be boring –it’s just a lot of banging it out and blow jobs –he is never bored. He wants it all the time. I don’t even have to bring out my skills as a fluff girl to get him going. It seems my previous job as a fluff girl was a waste since I don’t have to use it in my relationship.

Yes, you read that right. Once upon a time, a long, long time ago, I was a fluff girl.

Ok, so maybe I wasn’t actually a fluff girl….but I sort of did the same thing…

Please don’t call PETA on me. I know the dogs liked it. I was a very good doggie fluff girl.

Are you scared yet? I know this sounds so terrible.

Let me explain. When I was in college I worked at an animal hospital. The doctors I worked with were reproduction specialists so I helped with all sorts of weird things that normal people would never admit to doing all over the internet. But very few people have ever called me normal. The weirdest thing I ever had to do was fluff dogs and then jerk them off.

(I cannot believe I am writing this right now!)

I would drench a towel in some pheromone smelling stuff, tie it around my waist so it was covering my ass, and then I would dance around for the male dog until he was “turned on.” Or as we call it in the animal world “his lipstick was out.” When he was ready to go I would give him a handie and collect the sample.

I can’t believe I just admitted to giving dogs handies. That is all kinds of gross.

You see? We are having way more sex than anyone else I know and he STILL masturbates all the time. Whenever I complain about his sex drive and tell him he needs to bring it down a notch, he always feels the need to remind me that I created the monster and that his crazy horniness is all my fault.