Tales From my Twenties -- Rocklahoma Style

In the spring of 2007 Leland called me at work. “Do you have any interest in taking a road trip to Oklahoma?” he asked.

“How bout if we were going to see White Lion in concert?” he asked.

I almost didn’t believe him, but sure as shit, White Lion was playing at Rocklahoma, an 80’s hair band/cock rock music festival. I am fairly certain we bought our 3 day passes that night.

We love White Lion and actually give them a little credit for us being together.

In July, we packed the car and road tripped to the concert. We brought all the essentials: clothes, sunscreen and the beer bong.

The festival was in this big field, with tents of merchandise, food and beer set up all around the perimeter. It was HOT. So I did the only smart thing: I started drinking excessive amounts of Miller Chill, even though I thought it was sort of gross. 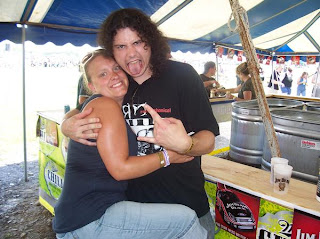 We were outside for the entire day, switching off between watching a band, drinking beer and doing shots in the alcohol tents, and heading back to the parking lot to make some friends and do beer bongs with total strangers. 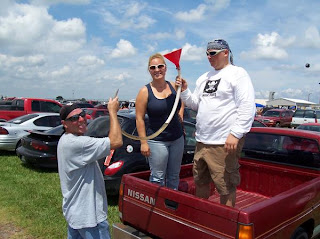 I had no idea how drunk I was. 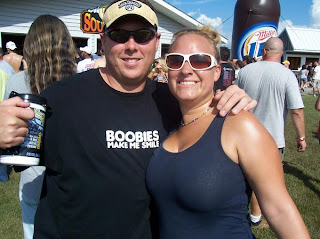 I sort of recall laying on the grass by my car and taking a nap.

There are hazy images of Leland sticking his fingers down my throat to make me throw up.

Apparently I didn’t learn my lesson after drunkenly signing a consent form for Girls Gone Wild. That story will be coming later.
Posted by Yankee Girl at 7:02 AM

Whaaaaaa??? And why have I not seen this footage??? Uhhh, I meant, glad you had a great time! hehehehe

OMG! That is too funny!

Lmao that is hilarious! I can't wait to hear the GGW story!

OMG, you have the best freaking stories. But OF COURSE you found a signed release form!

Luckily, my drunken days were before the age of Girls Gone Wild because I certainly have had my moments but was fortunate enough to not have them documented on video! At least, you had fun and have a great "Do as I say..." story for your kiddos.

?? Wow... So how much in royaltys do you still get for showing your breasts?
I remember White Lion! I think I still have a tape around here somewhere but no where to play it...

Too funny! You always have some of the best stories!

True love is sticking your fingers down your wives throat to make her vomit....and not saying anything when she bares her boobs for the Howard Stern show!!

I love this story, almost as much as the carney one!!

OMG that story is hilarious! Love the pic of the guy with the tits t-shirt. Priceless!

Bahahah Did you really? You are a Girl gone wild! :)

did you get to see a copy of the footage. I'd save it to show your grandkids :D :D

That is so funny! I climbed the rock wall at Oz Fest 1999 topless for an autographed Ozzy cd.

Holy shit!! Howard Stern??!?!? I love Howie and friends! Girlfriend, that sounds a lot like a cross between the infield of the Talladega 500 and a Wide Spread Panic concert. I'm not even going to lie. That must be true love b/c I would NEVER put my fingers in the Mister's mouth to induce vomiting.

Helping you to puke = true love!

WOW - that is funny. Hope that hangover didn't last too long. Girls gone wild??? Can't wait to hear this story.

You did not! LOL! And Leland stuck his fingers down YOUR throat to help you throw up? Now that is serious love! Or just absolutely disgusting! HA! At least it sounds like you guys had a blast, that's what counts right?!!

You know something? You (and Leland) may have been the inspiration for the "Girls Gone Wild" video but were to drunk to realize it...

Just think - you may have missed fame and fortune laying there in the grass taking a nap...

If it's any consolation, your breasts look fabulous in that last picture.