Last weekend Leland and I went to visit his brother in Shreveport, LA. We left Wednesday afternoon for the 14 hour drive and arrived at his brother’s place at 7am. About 2 hours previous to our arrival, Leland and I stopped for gas one last time. When we pulled in to the truck stop, we saw this small dog limping around. Naturally I had to get out of the car and visit with him. As I was petting him, one of the workers from the truck stop came outside to talk to me. She told me that Shorty (which is what they were calling him) had been pushed out of a truckers MOVING truck and left there. It had been three weeks and no one came back for him or took him home with them. 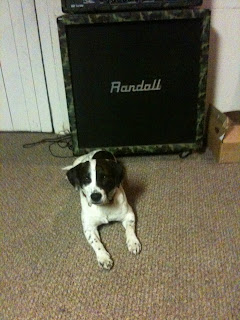 My hands were tied.

I HAD to take him.

There is no way I would have been able to leave that truck stop without him. All I would be able to think about is his sad little face and how much he just wanted some love. And then I would have decided that I was just as bad as the douchecanoe who abandoned him.

So we put him in the car and he spent the trip with us.

Now that we are home, we took him to the vet and got him vaccinated and dewormed. Though he didn’t have fleas, we gave him flea meds as a precaution and then picked 8 ticks off of him. His heartworm test came back negative so we started him on heartworm prevention. Today he is at the vet getting neutered.

And having hip surgery.

As is turns out, when the douchefucker of a trucker kicked Shorty out of his truck, Shorty broke his hip. The x-rays showed that his hip was worse than we thought. Without surgery his muscles could atrophy or the scar tissue could cause severe arthritis, making it hard for him to even walk.

So we are fixing it. We will somehow come up with the $2000 dollars for the surgery. Though money is super tight, I am trying not to think about the effect this is going to have on my bank account. Instead I am trying to think of Shorty. Instead of feeling bad for myself, I am feeling bad for Shorty. In his short life (the doctors think he is between 1-2 years old) he has been kicked out of a moving vehicle, left homeless and with a broken hip, he was a feeding ground for ticks, AND the x-ray showed a BULLET in his leg. 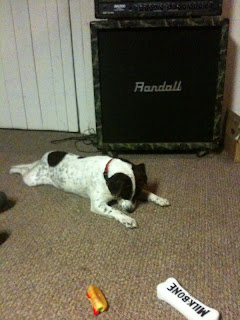 There is a special place in hell for people who would do this to a dog.

In the week that we have had him, Shorty has stolen my heart. Though he has a broken hip, he loves to run and play. He is so gentle and loves to cuddle. He loves to take rides in the car and he loves to pretend to be tough.

As much as we love him already, Bacchus just won’t let us keep him. I think Bacchus would be able to come around with time, but our friend Joe was in the market for a dog so he will be keeping him. It is going to break my heart to let him go, but I know Joe will give him a good home. Plus, Joe lives 5 minutes down the street so we will be able to see him again.

If anyone is interested in helping us make sure Shorty gets the care he needs, go here.
Posted by Yankee Girl at 6:41 AM

Oh, hon, bless your heart for taking Shorty in and making sure he's going to get a good, loving home and will be healthy and happy.

I have donated a small amount; I hope it helps.

It breaks my heart to hear stories like this :-( I'm going to bawl my eyes out now. Thank God for you and your husband! I'm happy to hear Shorty will have a better life now.

How weird that I posted today about April being Animal Cruelty Awareness month!

Sweet puppy. You are such a great person. And I agree that it is downride horrendous that someone could do that to a dog. dispicable.

He is so freaking cute! What a shame!!!! It's so sad that some people can be so cruel. Shorty is very lucky that you found him and are taking great care of him!

It's amazing the little guy survived all that! How wonderful of you guys to take him in and make him well. Not everyone would have done something so selfless. Good for you.

Animal cruelty just wrenches my heart. I hate hearing stories of abuse; it makes me soooo sad! We spoil our puppy to death and make sure she's taken care of; I just don't understand people who can do such awful things to an innocent animal. Shooting it AND kicking it out of a moving truck?? :( You are a blessing for saving Shorty and getting him all the care that he needs, even if it was more than you could afford. Not everyone would do what you did. And even though you can't keep him, I'm glad you were able to find a good home for him. :)

Awwwwwwwww... you are that baby's savior! You are so right about there being a special place in Hell for fuckers like that. Seriously. How can someone - ANYONE - do that to a sweet little puppy?? Totally breaks my heart.

Thanks to you for taking him in and caring for him. You are a saint, girl. :)

That just broke my heart. We rescued my dog from the pound and I love him so much! You could tell that he was abused because he was super skinny and he didn't want to do anything except lay around. Now he is a very happy dog with some extra pounds on him. I chipped in some money too. It is not much but hopefully it will help! You have such a big heart. I agree that there is a special place in hell for people who are cruel to animals.

Animal cruelty is truly dispicable... Hopefully Kharma catches up with those that do this sort of thing.

And you act of wonderful mercy shows the good that human beings can do... He is a realy cutey pie!

I chipped in what I could. Might be able to chip in more later.

Heartbreaking/heartwarming story! Thanks for being the first person to make me cry today! =)

What a shame. It seems that it was meant to be for you to come along like that at the right time. God bless you.

I would have done the same thing. I chipped in a little too.

you have a good soul.

That's so sweet that you took him in!

What a wonderful thing you are doing for Shorty. nice of your friend to take him as well...

I'm not in the market for a dog but I would have taken him too..

Such a sweet puppy. So cool that you found him and then found him a great home.

Heartbreaking story. I am just glad that Shorty survived. I do hope that you would get the assistance to make that operation happen. You are a good person girl, really good person. Bless You!

I chipped in, it isn't much at all, but if I can, I will go back again at some point!

thank you for being the person to do this! I have two rescue pups, and I dread what they must have gone through before us.

Stopping by from Follow Me Friday at Trendy Treehouse. I'm following you now! Hope you'll have a chance to follow me, too. :)

Thank you for helping him.

Excuse me while I go sob.

Grrr!
Poor doggy.
I am SO happy you took Shorty in. He's CUTE!

Awww, this breaks my heart, yet has a happy ending. Too bad there aren't more people like you in the world. He is so lucky to have you ad Leland.

Aww, poor little guy! And you are incredible for helping him!

That is just horrible. Absolutely horrible. That poor poor dog. How do people justify doing such awful things to an animal who has done nothing wrong. And not that it should make a difference but he is sooo cute! Good for you for standing up for him and getting him the care that he needs!

Sometimes it's hard to understand all the cruelty in the world. But then someone like you comes along and does their best to make it all better. I chipped in a little, hope it helps! Good well soon Shorty!

who shoots a dog? more specifially, who shoots an absolutely harmless, loving, adorable dog? you really did a great thing by taking him in- i can't wait to meet him!

Oh, what an adorable little dog! I am not a dog person, but what you are doing for that little guy is very admirable!

I am SO glad you rescued that dog, that you found him a good home and that you'll still be able to see him!! How awful for that poor puppy to have been treated that way -- you are such a kind-hearted person!!

I'm not a pet person but I don't understand how anyone could mistreat an animal like that. You're a good person. xoxo

I would have done the same exact thing!! I am always recueing animals. Drives my husband crazy. But I cant just sit there and watch an animal suffer.

I hope someone breaks that truckers hip so he can see how it feels! Asshole.

Just now catching up - what a bastard who would shoot a dog :-( makes me steaming mad. How awesome that your friend stepped up to adopt him.

Poor Doggy. I have taken care of many kitties in the past when our local Humane Society didn't have a place for them. They had no shelter and had to put animals up at local vet clinics.

God bless you for saving this sweet creature. If I had the money to send, I would, but I just can't right now. But if you go to my website, you'll see a link to "Tails of Joy" on my right sidebar. It's Elayne Boosler's organization and they are set up to help in situations exactly like this. Go to the website and contact her. Maybe you'll get some help. They don't do large grants, but you may get $50 - $75.

oooooohhhhhh myyyyyy goood! How horrible! I'm so far behind on all this! Good for you though for taking him and giving him a good home! I just keep seeing him flying out of a moving truck... that is so horrible!

I am so grateful that there are other kind-hearted people out there who help animals in need. You are an angel. I love what you did for him and I'm glad he's got a home now....

there's a special place in heaven for people who take in dogs like shorty. you're a sweet, sweet person to have done this. i'll give what i can. it won't be much. i don't have a job right now, but i do want to help. :]