I am having a hard time staying awake at work today. I usually get bored at work and start to get a little tired after lunch, but today I can hardly hold my head up.

Because Leland and I have been staying up late watching episodes of The Office.

A few weeks ago a friend lent us the first season. After watching all six episodes in the first season in one sitting, we decided to watch the remaining 4 ½ seasons as quickly as possible.

Well, it wasn’t actually a conscious decision. We just thought it was funny and quite possibly the best show on television and just couldn’t stop watching.

We literally couldn’t stop watching. When our friend lent us seasons 2 & 3, we thought it would be enough to get us through a weekend.

We finished both seasons in the matter of a couple of days and couldn’t wait till our friend got back from his vacation a few days later to get season 4. I made Leland get season 4 for us immediately so we could keep watching. We finished seasons 4 & 5 in just a couple days.

Now we are trying to catch up with the 6th season. Since it’s not on DVD and NBC only has a few of the more recent episodes on their website, Leland and I had to do a little searching to find the first several episodes of the current season. We were able to find them all at Amazon.com, but Leland was not interested in paying $1.99 for each episode.

You know what happened next?

We had a fight about whether or not we should spend the money to watch the episodes. I realize that saving money is always better than spending, but I wanted to watch The Office.

So I did what I had to do to get Leland to agree to spend the money.

And pouted enough for him to realize that if he didn’t acquiesce he would have to deal with me pouting for the rest of the night.

A half hour later we were back at the computer, downloading episodes of The Office from season 6.

Can you blame me for acting like a baby? I mean, come on, who wouldn’t want a little dose of Dwight K. Schrute? 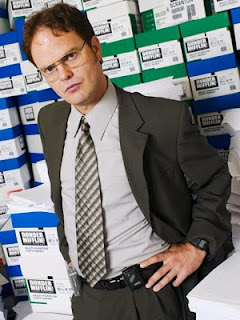 And as much as Michael Scott annoys the hell out of me, I can’t help but keep watching. Watching Michael Scott try to run a business is like not being able to turn away from a car wreck. It’s scary and disturbing but turning away is just not an option. 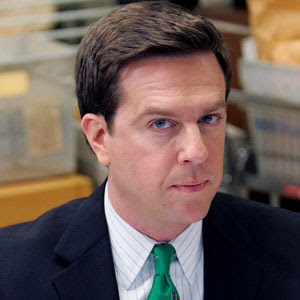 It would most likely be weird and awkward, but I am fairly certain they could give me some good lovin.

And then I could tell Angela that I had sex with both of them as well!

If you don't watch this show, give it some serious thought. Just make sure you have a big chunk of time available because once you get started, I promise you will not be able to stop.
Posted by Yankee Girl at 1:04 PM

Have you tried hulu.com...they might have all of season 6. I dont really know how hulu works but I have heard good things from other people.
Just a thought! :)

When I was pregnant with my daughter and on bed rest in the hospital, I filled my days watching every single episode of this show on my lap top. I'm hooked. Dwight is my favorite, too! ;)

yikes, i don't know about that threesome...but you never know.

you should check out the british version sometime, though. i think it's pretty damn funny!

i have tried to watch it..and nothing...just not funny to me..
same with curb your inthusiasm...nana.

OMG, you're JUST now discovering The Office???? Ok, I can forgive you. It's the only show I watch on TV. Have watched it and loved it since the beginning. I randomly quote Dwight on a weekly basis. Love, love love this show sooooo much!

You need to go to a friend's house who has a computer and watch the newest episodes online. NBC should have all of them but sometimes they slow up a computer. I know your home computer isn't working so you'll have to borrow someone else's unless you can get away with it at work.

Have fun watching the remaining episodes. I've missed a few myself from making the move to Florida. I can't wait to see them.

Hey you! Thanks for the sweet welcome!

I hope blogging will become my own slow, controllable investment. I'm excited about it!

And I love The Office, even though AFN only runs the first season over and over again.

I was like that with Eastwick actually.
Saw that you stopped by, returning the favour. And from SITS saying hi.

I haven't watched this show faithfully, but I have caught a few episodes over the years and it's funny. My favorite episode was Jim and Pam's wedding. I loved it!

Have you seen the original British version of it with Ricky Gervais?

There are definitely days when I can't stop watching my favorite shows either. But I second (and third) some of the previous commenters who suggested hulu-- GREAT site!

That's so cool that "Groundhog's Day" was filmed in your town-- and that you get to see it for free!

~Elizabeth
Confessions From A Working Mom

How great is that show?! Save the $ - you can find it on repeat eventually!

Man, I love that show. And the early seasons were the best. Always fun to see how many times Michael Scott can make me cringe per episode with his non-PC actions.

Keep an eye out for the UTZ Cheeseball scenes :D

I LOVE The Office! Scott and I watch it every Thursday (that's when the new episodes are on)

I dont watch The Office..but I did get into this habit trying to catch up on MadMen...and Weeds. YIKES. We watched three episodes in one night once. Lovely. LOL.

I haven't watched a complete show of Office from start to end - I end up cringing from it... but some of the scenes are hilarious... so I tune in and watch for as long as I can stomach it.

I just made my way over here from SITS and wanted to say that I love the Office too. Check out http://www.nbc.com/The_Office/. There is all kinds of fun to be had on that website!

That's enough of a review to get me to give it a try, I've never seen the show. Thanks.

I was entirely too excited to see the title of your post. I love Dwight. And I may or may not have informed my dr's office that Thursday night appointments are off-limits because I will become crazy-preggo-rageful if they schedule me during new episodes.

I also may or may not have accidentally never returned the British version to my video rental place a few years ago...also entirely worth watching.

LOVE the Office! Ready for the new episode...starting...NOW!