Before I start with my storytelling, HAPPY NEW YEAR!!!! May 2010 bring only good things to all of you!

Today is my first day back to work after being off for 11 days. When I took 11 days off of work I never intended on taking 11 days off of blogging as well. But it happened. Leland was off of work as well and we spent the 11 days doing a lot of partying and a lot of being lazy. Christmas was spent relaxing with my family, drinking a lot of wine, and eating a lot of food. Siren came to visit for a week on the 27th. This is when all the partying happened. Her birthday was on the 28th and Leland’s birthday was on the 29th so we had an 80’s party for both of them. 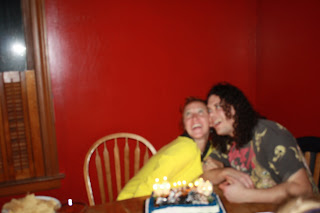 I'm not quite sure what they are looking at in this picture... 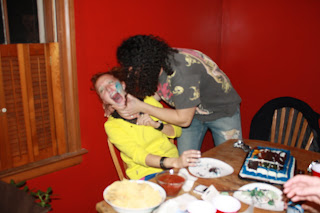 Smashing cake in each other's face. I somehow managed to dodge Siren when she came after me. 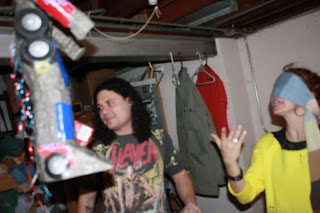 Leland and Siren attacking the pinata. Yes, we got a pinata for the party and it was so much fun! We made everyone do a shot before their turn. We were lucky no one puked while they were being spun around. 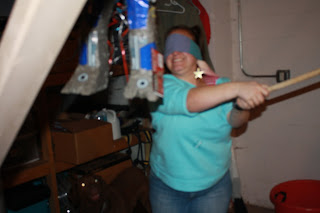 That's me taking a swing.

On Leland’s birthday we used the BB gun Leland got for Christmas to shoot plastic army men in the basement. It probably wasn’t the safest thing to be in a basement with BB’s flying everywhere, but we didn’t care. Decapitating plastic army men was way too fun to stop and think about our safety. We all eventually made it out of the basement without shooting our eyes out. 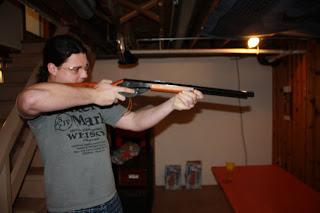 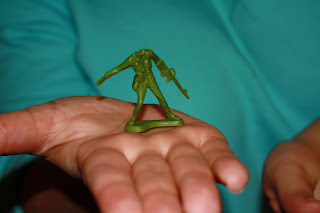 That's the army guy whose head I blew off with the BB gun.

New Year’s Eve was at my house. We had a few friends over and played beer pong, shot at more army men, did shots and toasted away 2009. It was pretty low-key but we all had a good time. Siren and I had to be up at 5am the next morning to get her to the airport in time for her flight home so I didn’t get drunk and didn’t wake up with a hangover! 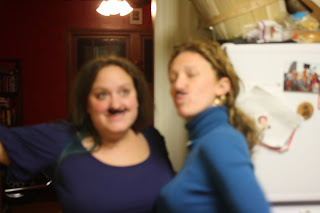 Siren and I having fun with moustaches. 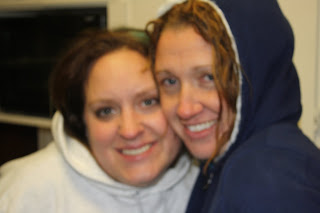 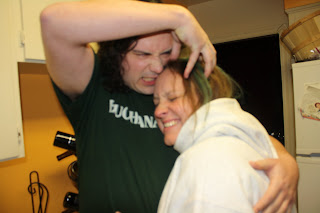 Leland doing something to my head.


This past weekend was really quiet and relaxing. Leland and I spent nearly the entire weekend playing with the Wii I got him for his birthday. We made it to the gym on both Saturday and Sunday, which is something we haven’t managed to do in months. Even though I hate the gym, it definitely felt good to get back into the routine. Once we were there, I realized how hard it is going to be to walk 2010 miles this year. Four days into the year and I am already behind. It is so cold right now that walking outside really isn’t a viable option for me, and walking at the gym for hours at a time just isn’t my idea of a good time. For now I am planning to do as much walking as I possibly can now, and then make up the miles big time once the weather starts getting warmer. Once it’s warm outside, taking morning, afternoon and evening walks will be much more possible and enjoyable. But that’s a long time away.

Now that the holidays are over, I can already feel myself slipping into a winter depression. It hate the cold weather. Just over a year ago, Leland and I decided to move to Austin, TX. We put our house on the market and Leland starting looking for a new job. After six months of job hunting and trying to sell the house without any success, we took the house off the market and Leland resigned himself to staying at his current job a little while longer. The planned move was actually the reason I started this blog. I really wanted to get out of the cold weather once and for all and it just didn’t happen for me.

Now that it’s cold again and I am stuck here in the Midwest, I am trying like hell to keep a positive attitude and to plan things to keep me busy and to give me something to look forward to. In an effort to make me enjoy the cold weather just a little, Leland and I have decided that our first fun winter adventure will be going to Minnesota to go ice fishing. I am so pumped. I have never been ice fishing before and know absolutely nothing about it but plan on going to the library to give myself some Ice Fishing 101 soon. I am hoping to make it to Texas some time in February and will have to think of something fun to do in March. Hopefully I'll be able to keep myself busy enough that when April arrives I won't have to worry about pulling myself out of a slump and I can just put on my walking shoes and rack up some serious miles outside.
Posted by Yankee Girl at 11:24 AM

I love that your winter adventure is to go ice fishing. Ive lived in MN my whole life and I think I have ice fished once. I hated it. But I hate being cold (go figure, huh?). I think our highs for this week range from 0 to 10. Awesome...But if you find fun things to do in the winter it does go a bit faster!! :)

I'm cracking up, thinking of you guys shooting the little army guys!

Hopefully, you can at least get some sunshine during the winter.

That was a devilishly good 11 days!

Goodness. You and Leland and Siren never have a dull moment do you?

Ice fishing? In Minnesota? Are you crazy! LMAO...

I'm going to practice with my BB gun this winter. I doubt I could even hit the side of my basement as embarrassing as that is to admit (I used to shoot 3x a week on the Collage ROTC rifle club)

Don't forget to take some ice with you to put the fish on after you catch 'em!

Welcome back and what a novel approach to pinata busting. Poor army guy.

2010 miles to walk that sounds like a great goal but since I am a lazy ass I will cheer you on.
xx

ha! new year's was so much fun- thanks for having us :) so i'm officially on here now- i just started a blog as one of my new year's resolutions. yay!

I'm excited for the ice fishing adventure! Maybe it'll be a little bit warmer by then?!!

That's one powerful BB gun. Another solder loses his head in the Christmas aftermath.

Welcome back....yes, I have missed you!

I'm glad you got to spend 11 glorious days with your lover! Lazy, fun days like that are always the best memory makers!!!

hahahah shooting army men reminds me of kevin mcallister! lol I wonder how it worked so well for him! loved the pics and i'm glad you had a great 11 days!!

Fun pics! Everyone looks so happy.

welcome back..the mother in me kept screaming 'oh my goddess, they're going to shoot their eyes out'..ha..
if you come to texas you have to make it to west, texas(17 miles north of waco on I-35...) and I'll buy you a skunk egg at the pizza house and show you where to get the good kolaches.

Welcome back!!! Yes, you were missed. You guys know how to have a good time. A real good time - as I see some of the pictures are blurry ;-) I hope Siren is doing well. She looks really happy, and so do you - winter does suck. I barely make it out this time of year to do anything - and we live in the South!!!! Hang in there...

Looks like fun. So happy you had so much time off!

Oh honey, I totally get your winter depression thing! Here in northern Canada, it's winter forever! The trick is to get some seratonin into your eyeballs. Seriously. No glasses or contacts, just sit outside with your eyes open on a sunny day. It will get you through the winter.

I would so be all up into an 80s party, I'm a tiny bit jealous I wasn't there!

And I'm just like Jackie Sue, I instantly thought "You'll shoot your eye out!"

I get depressed in the winter, too. The kids have been off school for 3 days (probably won't go back tomorrow) and it is snowing like a mother outside. Gray, cold, yuck. I'd move if I could.