The Hubby and I love to take roadtrips. We took our very first roadtrip one month after we started dating. A week or so before we became "official," we were at a restaurant and I had mentioned that I had never had a philly cheesesteak sandwich. After trying to get me to order one, I said no way. The first time I have a philly cheesesteak needs to be in Philly from a street vendor.

It was then that we decided we would leave on a Friday night after work and drive to Philly so I can have a blissful moment with lots of beef and cheese.

I highly recommend that everyone takes a trip with a new boy or girlfriend at the very beginning of a relationship. After being in a car with someone for hours, all of the embarrassing things that can happen that most people are afraid to let happen...well, actually end up happening. After one sickness we called the Death Virus and one case of raging diarrhea, we were both introduced to each other's nasty excrement. I know it sounds gross, and trust me it was, but after that we realized we are both human and we both poop so we should just get used to the fact that the other person does it.

Since then we have taken quite a few roadtrips together. Some places have been exciting like New Orleans and Mt. Rushmore. Other places were not so cool but we had fun anyway, like Radcliffe KY and Charleston WV.

While in KY, all we really did was drink. A lot. Because the husband loves all things Whiskey related, we took a short trip to check out the Maker's Mark Distillery. In this photo you can see the husband, Eric and Sexy D get pumped for the free whiskey tasting. 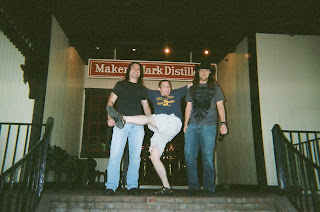 Here's a pic of the whole crew. I'm surprised none of us are wincing in that shot after the first shot of whisky. Maybe Hot Husband has turned all of us into whisky drinkers after all. 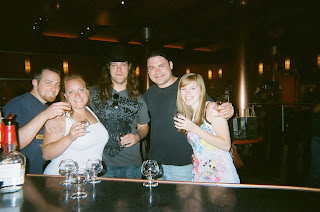 And to prove that all we did was drink, the last picture I'm going to share is one taken in our hotel room, after all five of us had done at least two beer bongs. That's right. 5 adults who are closer to 30 than we are to 21 were doing beer bongs in a hotel room. 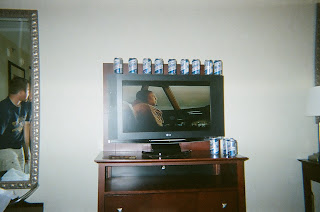 Oy my head aches just looking at your collection of cans.

You ever road trip this way - I'll show you were the best Philly Cheesesteaks in town are - but you got to promise two things...

No poopies and no vomiting (farts will be permitted). :)