I Will be a Band Wife Once Again 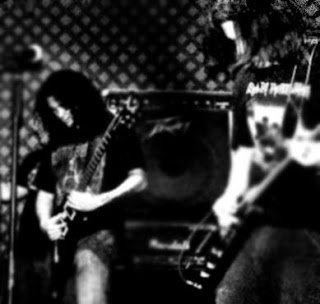 The noise is moving back into my basement. For three years, Hot Husband's band practiced in our basement. When we decided to relocate last October, the band broke up. After listening to heavy metal music three days a week, it was nice to have some quiet in the house again. Though admittedly, I started to miss the noise in the basement. The sadness will be short lived because Hot Husband and our BFF Sexy D have just started another band. They are going for hardcore death metal with lots of crazy guitar action and one badass drummer. It promises to be very loud and to leave me wondering why I ever missed the noise in the first place.

Hot Husband is on the left of the photo. Sexy D is on the right. This pic was taken at a show they played with their old band. Oh yeah, and something you all might find interesting....the name of the new band is Murderboner.
Posted by Yankee Girl at 10:09 AM 3 comments:

Stink on the Drums 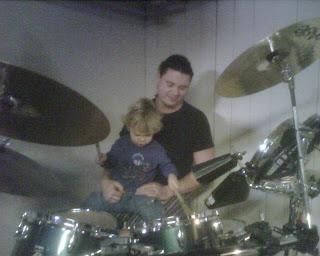 Whenever our nephew Stink comes for a visit, he loves to play the drums that are kept in the basement. It is something fun he can do while he is at our house that is completely void of kid toys. As Stink pointed out to me a few weeks ago by saying "Help me, I'm short," he needs to sit on someones lap while he plays. Although he is still a little too small for the drums, at 2 1/2 years old he is a pretty big boy who can do so many things by himself. I like to play the drums with him because it's the only time he'll sit on my lap. He loves to give and get hugs and kisses, but he is usually too busy to sit down. For some reason I get a little annoyed when people bang on my piano, but I think it's awesome when Stink bangs on the drums.
Posted by Yankee Girl at 9:47 AM 5 comments:

Sleepless Saturday Night aka "I Have Meat."

The Bachman ran away on Saturday night/Sunday morning. We had some friends over and had a few beers and somehow lost track of the dog. I know, this is terrible pet ownership and I have been punishing myself for it since we found Bacchus. I woke up at four in the morning to find Hot Husband sick in the bathroom because he had more than "a few" beers. I noticed things were pretty quiet, so I went out in search of the dog. At that time I had no idea it was going to be a four and a half hour search. Naturally, once I noticed he was gone, I flipped out. I made Hot Husband get off the floor and start looking with me. I took the car because I was the sober one and he set off on foot. After about two hours, we still couldn't find him. My parents and sisters joined the search.

Hot Husband and I came home to have some food and regroup. Hot Husband starting packing a backpack with 2-liter bottles of water and various types of meat. When I asked what the hell he was doing, he then told me that he was going out looking for The Bachman and he wasn't coming home til he finds him. "I have meat," he said, "I'll be fine." I know that trying to reason with a drunk person is pretty much impossible, so I let him head out with his backpack full of meat. I later found out that he also packed 3 pairs of socks, 2 lighters and 3 knives. I still have no idea what he was planning on doing with that combination of items.

Around 8am I called the police and was told a dog matching the description of The Bachman was in a neighborhood a few blocks away. I called my sister and had her meet me there, and when I showed up she was trying to talk The Bachman into getting in her car. I have never been more relieved in my life! I tried to call Hot Husband and tell him the good news but got no answer. My sister told me that he walked the 2 miles to her house and was sleeping in her bed. And he told her all about his meat.
Posted by Yankee Girl at 3:23 PM 1 comment:

Call Me Crazy---You Wouldn't Be The First!

Today is the nicest day of the year so far in Woodstock. Everyone I know has been waiting for this day all week. A few days ago my boss offered me free tickets to the Cubs game today and a free day off of work. I turned them down. I know, I know! Crazy right? But I have sort of decent reasons for staying behind. First, everyone else in the office went to the game. So that means I am at work all alone, I have the office door open, the radio playing as loud as it will go, and have some much needed alone time to get some stuff done. Second, if I went to the game then I wouldn't be getting home til well after 6 and I really just want to go home and hang out with the husband and dog and grill some yummy food. I've been waiting so long to have the chance to BBQ again, I just couldn't pass it up.

Oh, and I just went on a beer run and am enjoying some Dos Equis Ambar as I type. This is a great day.
Posted by Yankee Girl at 10:05 AM 3 comments: 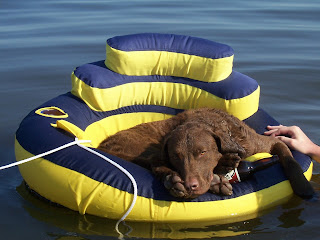 They are normal! Yay for normal poops! This is my awesome dog. I posted this pic months ago, but since I am at my mom's house while I type, I don't have access to all of the newer pics of The Bachman. After five days of vomiting, having bloody diarrhea, not eating, and just generally ADR (which in the very clinical terms of veterinary medicine means Ain't Doin' Right), The Bachman is almost completely back to his old self again. He had to spend a night at the emergency clinic and have fluids pumped into him and lots of meds, but now he is running around and playing. He is back to licking my face in the morning, climbing on top of me while I am on the couch, trying to give me hugs while I try to pee, and just generally loving Hot Husband and I as much as he can. I am so glad to have a dog with normal poops again!
Posted by Yankee Girl at 12:06 PM 2 comments:

The Bachman is at home and seemingly doing better. He hasn't vomited all day, but he hasn't pooped (yes, I am talking about dog poo on my blog!) all day either. When I took the x-ray this morning all I could see was poop. So him not pooping can mean that he is blocked by an obstruction in his bowels. If he doesn't push some out soon then we'll have to discuss surgery. Hopefully he doesn't wait too long!

I'm trying to remain positive because he is acting like himself again and has stopped vomiting. And even if we have to cut him, I work with the best doctors ever and I know he'll be well taken care of.

I promise to update all of you on the status of his poo very soon!
Posted by Yankee Girl at 3:02 PM 3 comments: 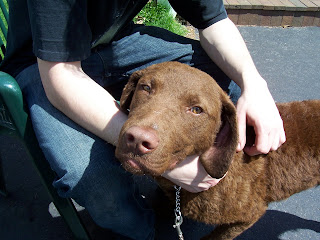 ...eats whatever he can get a hold of. Knowing this, we do whatever is in our power to make sure he eats only digestable things. But as hard as we try, we can never be 100% sure that he didn't get in to something bad. After I am done writing this, we will be on our way to the animal ER. Hope as hard as you can that we don't have to cut him!
Posted by Yankee Girl at 4:55 AM 2 comments:

Hot Husband and I just got home from work. We are a one car family so he picked me up and we drove home together. Usually we are talkative and laugh, and on Fridays we have even been known to make up "Yay Friday" cheers in the car. Today was different. We are both being mope-a-lopes and we rode home in silence.

Then Hot Husband decides he is going to shake up our Friday night by making us a shot. He called it Bog Juice and I didn't ask questions. I just drank it down. After I asked for another he gave me the recipe.

I thought the first Bog Juice shot was pretty good, but I asked him to make a Bog Juice 2.0 version with 1 shot less of grapefruit juice. It was a lot better only now my insides feel like they are burning. We're going out for Mexican to get rid of the burn. Then I'll have a whole different kind of burn going on!
Posted by Yankee Girl at 3:04 PM 1 comment:

Hot Husband has the best in-laws in the world.

They genuinely love him, want him around all the time, have taken the time to get to know him and they like him just as he is, and no matter what crude thing comes out of his mouth, they all laugh. The biggest problem Hot Husband has with them is that they love him too much. Because he has the most screwed up family I have ever encountered, he isn't used to people wanting to spend so much time with him. Tons of people have heard him proclaim his love for his in-laws, and his in-laws feel the same way about him. Because I have the worst in-laws in the world (though I am sure a million people would argue this with me), it blows my mind that an in-law relationship can be so healthy. My dad and Hot Husband are buddies. They text and hang out, when we are all together for family functions they can hardly be separated. My mom and Hot Husband have also bonded. They can tease each other and laugh, and they teach each other things. My mom taught Hot Husband about Polish traditions and things about religion; he taught her about Camel Toe.

My sisters have a different relationship with him, thought it too is a freakishly good relationship. The relationship between Hot Husband and my sisters has turned into a typical brother/sister relationship. He would gladly kill anyone who hurts them, and they gladly tease him and tell him he isn't good enough. Hot Husband often says how lucky he is to have such cool in-laws. It makes me wonder... 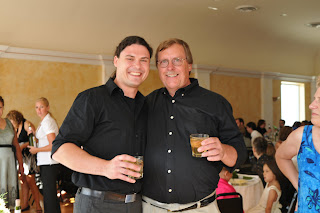 Today Hot Husband and my dad are at Whiskey Fest which is held every year in Chicago. This is their male bonding ritual. They love it because they can drink as much of whatever kinds of whiskey they want. I know I'll hear stories about it all year long. I am so happy to have some time to myself tonight, but know it is short lived because I am the lucky one who gets to pick them up afterwards. Then I get to drive home with them while they are plastered. Lucky me!

Notice they are both drinking whiskey in this photo!